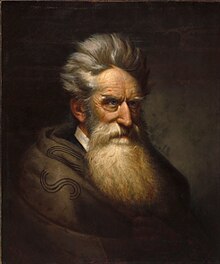 Abolitionist John Brown attacked the federal armory in Harpers Ferry, Virginia in 1859. He wanted to use the weapons stored there to arm slaves and start a rebellion against the slave-holding South. It didn’t work out like he planned, though, as he was captured and subsequently hanged for treason.

Opinions were, and still are, mixed about Brown. Some thought him a kook and a terrorist. But others thought him a righteous man with a noble cause, memorializing him in art and song. It seems to me that conventional wisdom about him today is that he was maybe a little too aggressive, maybe a little high strung, but his heart was in the right place. He’s certainly seen more as a freedom fighter than a traitor.

Kim Davis, county clerk of Rowan County, Kentucky, has gone to jail rather than issue marriage licences for same-sex marriages, arguing that to do so would be a violation of her religious beliefs. And so, a low-level office holder in rural Kentucky is generating nationwide commentary because she thought the moral thing to do was to defy the law.

I don’t know anything about Kim Davis personally, and I’m trying hard not to read anything about her, because I’m sure that I’ll get a fairer representation of Alanis Morissette’s ex-boyfriends from listening to her music than I’ll get of Kim Davis from reading the mainstream media. And to all the schmucks who are currently tasked with digging through Kim Davis’ neighbors’ garbage, aren’t you glad you dropped $120,000 on that journalism degree?

But who Kim Davis is doesn’t matter. Your opinion of her, like opinions about John Brown in the 1850’s, will probably depend largely on your opinion of the issues involved. I’m just disappointed that a lot of people who are on her side of the argument don’t have a better understanding of what’s at stake, and aren’t supporting her accordingly.

A lot of traditional marriage supporters, while saying they understand Davis’ opinion, say that she’s out of line because gay marriage is the law now, and she’s an elected official and duty-bound to uphold the law. They say that officials can’t be allowed to pick and choose which laws to uphold, or else we’ll have anarchy. Basically, even people who vehemently disagree with the Supreme Court’s gay marriage decision say that it must be followed because they’re conservatives, and what they want to conserve is the constitutional order that made America what it is, even when it generates unconservative reults like this.

To that I say, “Horse apples.” The constitutional order left town a long time ago. What Davis is doing is not only right, it is what must be done to re-establish some semblance of law that’s based on the consent of the governed.

I would love to see local political and administrative offices — county clerks, mayors, city councils, boards of education — flooded with Christians who look at judges who issue asinine, absurd orders and just say, “No, we’re not going to do that.”

Would that be anarchy? No, it would be elected officials doing what their constituents want them to do! Does anybody think that Kim Davis is defying her constituents with her stand? Are the people of Rowan County clamoring for more gay marriage? If they were, she wouldn’t have been elected clerk in the first place. And even if a pro-gay-marriage district found itself with Davis as clerk, she would surely be removed in the next election, if not in a special election. (And by the way, if Davis stood for re-election tomorrow, how much do you think she’d win by? 80%? 90%? Vegas wouldn’t even lay odds.)

Davis’ position doesn’t seem much like anarchy to me. But when an elite ruling clique ignores the text of law to force their whims on their subjects, that does seem a lot like tyranny, which is what we have. We have a ruling class which has preferences for how they think people should behave, and they dress those preferences in constitutional lingo as a means of coercing us into going along with them, with no regard whatsoever for what the Constitution actually says.

But this coercion only works if we play along. “Well, golly, if that’s what the law says, then I guess we have to do it.” At some point, the people have to pull back the curtain of the Great and Powerful Oz and see that’s it’s just some jerk back there with a smoke machine.

Maybe in the future, this little brouhaha will looked at like that Harpers Ferry raid — as a harbinger of one almighty push-back. I’m not holding my breath, but at least it’s something.